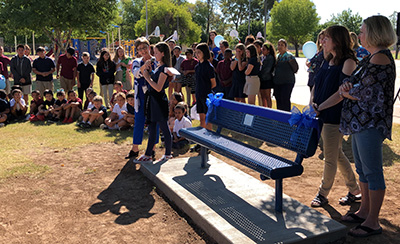 On September 19, 2019, Carminati Elementary held a special ceremony to dedicate a Buddy Bench in memory of the late Michael Shelton, who taught fourth-grade at Carminati but passed away unexpectedly last spring.

Shelton worked as a teacher at Carminati for more than 11 years but before that, he was an instructional assistant and then a computer lab assistant.

The dedication began with upbeat music playing and students dancing and singing while the entire school and many District personnel gathered around a blue bench underneath a shade tree where Shelton could be found every morning before school until the bell rang.

Carminati Principal Wendy Reeck opened with, “We are here to honor someone who gave more to us than we can ever thank him for.”

“Every single morning, he was on the playground long before anyone else, welcoming students and making sure that everyone was taken care of,” said Reeck, who explained that he made himself available if anyone needed to talk.

Reeck explained, “This bench is a safe place for anyone to come anytime during the day and sit and know that someone will sit down next to them and be their buddy.” That’s exactly what Mr. Shelton did every morning for the students and staff at Carminati.

“He was there to spread his kindness,” she said. “Everyone felt comfortable to come and talk to Mr. Shelton.”

Reeck didn’t know this at first, but Mr. Shelton gave out Tootsie Rolls because he wanted everyone to have a moment to think about what it means to be kind.

Shelton was a friend to all. He spread kindness all throughout the day.

“When you witness a kind deed; when you open a door for someone, when you help someone and say, ‘good job, nice try,’ or when you make someone new to Carminati feel welcome, that’s Mr. Shelton’s heart working through all of you,” said Reeck. 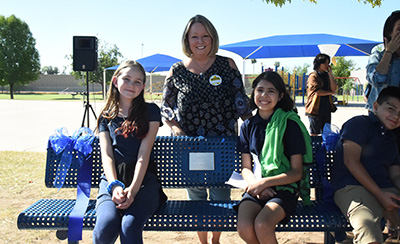 This bench will be a way for people to follow his example of caring for others.

For the last two years, Shelton taught fourth grade and made quite an impression on his students. Two of his fourth-graders from last year spoke at the dedication.

Samantha Messerschmidt, fifth-grader and student council president, said, “Everyone remembers Mr. Shelton. He was a great teacher here at Carminati. He came to school every day with a smile on his face and his Circle-K coffee. He would sit here and help students with their work. He was very kind. I remember one day a kindergartner was cold and told Mr. Shelton. He gave her his jacket. We love you, Mr. Shelton.”

Another one of Shelton’s former students, Fifth-Grader Sophia Perez spoke next, “Mr. Shelton believed that kindness matters. He always gave back to charities and fundraisers. He was also very funny. One day he spilled his coffee and said, ‘Burrito, taquito, enchilada, potata.’ It was the funniest thing ever,” and the crowd all erupted in laughter.

Perez also talked about some Kindness Matters cards that were handed out at Shelton’s funeral that said, “In loving memory of Michael Ray Shelton.” She described the cards, “On the back, it had some ways and reasons to be kind. I still use it to this day.”

Rushell Wreschner, Michael’s sister, stood near the bench, with two big bows of blue, Shelton’s favorite color, tied on either end, and read the silver placard on it: “Buddy Bench in Loving Memory of Mr. Shelton.”

Kelly Trujillo, kindergarten teacher, also talked about what kind of person Shelton was, “Mr. Shelton brought happiness to everyone he was around. We are going to spread a little happiness today by letting some blue balloons go.” On the 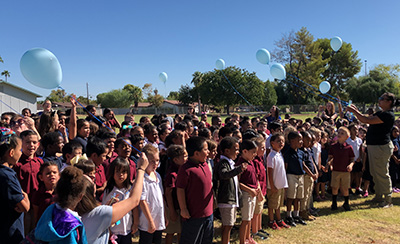 countdown, everyone yelled, “Kindness Matters!” and then let go of blue balloons that floated up into the clear, blue sky.

Afterward, Wreschner said the ceremony summarized what her brother’s life meant. “This means his memory will live on and won’t be forgotten,” she said.

The Carminati school library will also be getting some Buddy Bench books to go with the bench.

Michael Ray Shelton may have left us too soon, but he is still with us in his kind spirit that lives on with every kind deed. He has definitely made a big impact on anyone who knew him and even those who didn’t.

To this day, Wreschner still hands out “Kindness Matters” cards to people behind her in a drive-thru, after paying for their order, as a friendly reminder to people she doesn’t know that “Kindness Matters.” On the card are some simple ways to show kindness, like give someone a hug, let someone go in front of you, ask if you can help, say please and thank you, forgive someone, and the list goes on.

As a tribute to the beloved Michael Shelton, who did so much for so many others, whenever you get the chance, do something kind for someone, because “Kindness Matters!” 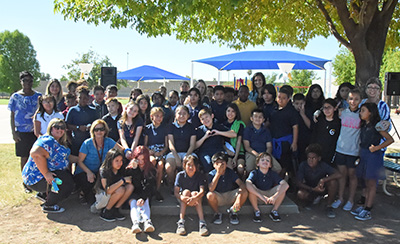