Laird School is one campus that is focusing on creating awareness and appreciation for Native American heritage. Each week this quarter, they are announcing a tribe at Laird with a brief set of facts about the tribe. At Laird, seven Native American tribes are represented in the student population.

In October, they welcomed special dance group Indigenous Enterprise. This group has traveled across the world performing their cultural dances. They came to Laird to perform and showcase their heritage for all students in an assembly.

“I am a strong believer that we need to respect the traditions of different cultures. Through events like this, I wanted to have our Native American students come away feeling a sense of pride in who they are and the traditions and beliefs they hold as Native Americans and to have the rest of the student body come away with a greater understanding and respect,” said SEALS Teacher Sherrie Griffin.

Several students at Laird also have relatives who were code talkers. Some of the families loaned the school items that have been put on display in the cafeteria. 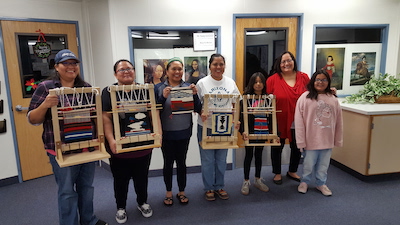 “I was talking to a parent, and she said her two boys talked about the dance assembly when they got home from school, and they don't often talk about school. That was cool!”

“We want students to always feel at home when they come into a Tempe school, regardless of their nationality,” said Native American Program Coordinator Ronald Stiffarm.

To learn more about the TD3’s Native American program, visit their website.