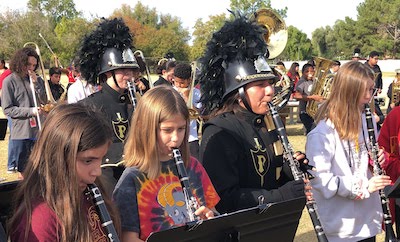 On the morning of November 15, 2019, the sound of music playing familiar marching band tunes filled the air at Rover Park. A joint coordination led by Band Directors Tyler Hutta, Eric Best, and Glenn Hart, the bands from Rover Elementary, Fees College Preparatory Middle School, and the marching band from Marcos de Niza (MdN) High School complete with their drum major and color guard came together to perform for their community in South Tempe.

Hutta is the band director for Arredondo Elementary, Rover Elementary, Nevitt Elementary, and Ward Traditional Academy. He thought this band celebration would be a great way to promote music and the amazing school bands we have right here in our community. He also felt it would help the younger students to see what their next steps in music could be, once they see the older kids performing right along with them. And what a great way to bring students of all ages and abilities together! 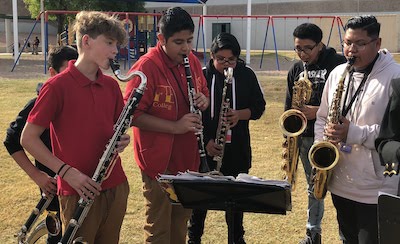 The three bands played a few songs together and then Marcos de Niza Marching Band performed by themselves, while their color guard danced and spun their flags, really getting the crowd excited. The concert ended with Hutta promoting the music programs at each school, encouraging the students to explore their interests in band and music in general.

Then Rover’s fourth- and fifth-grade band students lined up behind the Marcos de Niza marching band and marched away from the school, down the street to Marcos de Niza, playing their instruments along the way. Younger students from Rover cheered them on as they left, and neighbors from across the street even came out of their houses to hear the bands play as they walked by. The little ones were even heard telling each other how they wanted to be in a band or dance like the color guard some day!

Once at Marcos, Rover students were able to watch the full marching band show on the football field. Many students and staff from the high school also came out to watch their performance and give their support. This was good practice for the MdN Marching Band, who had their finals competition that  Saturday. The other school bands were there to show their support for their neighboring school. 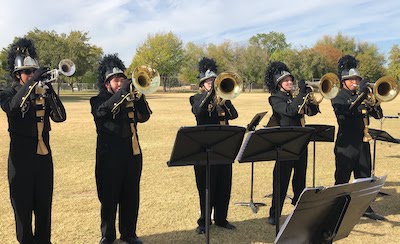 Hutta said he would continue to work together with the band directors from Fees and MdN and their bands to build this sense of community among them. “The high school students even volunteered to give private lessons to the elementary and middle school students after school,” said Hutta. “And the high school Jazz Band has offered to come and play for Rover, too.”

Hutta called the concert the “First Annual Rover, Fees, Marcos Band Day” and hopes to continue it every year on the Friday before Veterans Day.

“It was a complete success that inspired our band students to continue playing and taught all students that band is not something that just exists in a classroom but transcends into our community to connect with one another through their pride in music,” said Hutta.